Another ace gig, with some brilliant acts on the same bill. A good show and some great dancing in the audience.

Four bands were on in total. Bad Apes opened the gig, lets just say they were “experimental” and left quite a few punters a bit bemused. Some people even thought it was just the soundcheck. I sincerely hope they have day jobs.

The 8-Bit Ninjas were on second . They opened with ‘Theme from an 8-Bit Dojo’ before introducing themselves and got an extremely good reception. The sound quality was very much improved over the last gig, despite some early problems with the monitor speakers which meant the guys couldn’t actually hear themselves to start off with. 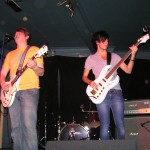 It was a shorter set due to only having a 30 minute slot, so ‘Go’ was dropped in order to compact the set a bit. ‘Pokemon Face’ was well received when it was anounced

The appearance of Clive* and his dance interpretation during ‘Shiny Spaceship’ was appreciated by the crowd.
Quite how someone can dance in two layers of clothing and an overcoat is beyond me! 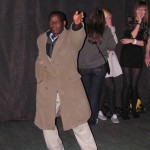 The night was completed firstly with ‘Crimson Joy’ who were popular and certainly knew how to work and interact with the audience, even roping in ‘Susan the Dancing Unicorn’ into their own set.

‘From The Get Go’ completed the line up, rather crowded onto the stage, they bought their own legion of ‘Slam Dancers’ who pretty much cleared the front part of the room as most people actually wanted to avoid have broken limbs. Even ‘Clive’ was knocked flying at one point.

Overall a good night. Especially for the ‘Ninja’s. Good Times.

Some Photos of the Gig can be found here: Photos
or here

* Clive is not his real name, well actually it might be, I’ve no idea who he is.

I managed to catch some of the 8-Bit Ninjas on a small camcorder. I’ve put some up on Youtube and an embedded link here

It was a difficult venue to film at due to extremely low light levels, hence the footage has a ‘graininess’ to it. Still, I’m reasonably pleased that we got something better than was already out there. If I can catch another one with better lighting I will do. I shall be booking them to appear at a private party sometime in late May early June so watch this space.
I’m still cutting & editing the rest of the footage and will put that up soon.

It was a good night, turnout wasn’t as good as the first gig, and the sound was not up to the same standard. This was more to do with the P.A. and the mixing rather than the Ninjas. The 2nd band, The Arcadian Kicks were very good but also suffered some P.A and Microphone problems.

A great night…The 8-Bit Ninjas have another gig at the Varsity in Wolverhampton on 19th March. I am hoping for more soon.

Ring Tone for your phone...here

The BBC are planning a range of cuts including the axing of BBC 6 Music and the Asian Network.

BBC 6 Music is, at the moment a purely Digital station (DAB radio) but is one of the few places to hear new bands and music that doesn’t make the mainstream stations like Radio One. Those of us who remember the late (and great) John Peel and what he did in promoting and advocating music that was a little different should feel stongly about this as BBC 6 Music should be seen as his successor.
Even if you are not a regular BBC 6 Music listener, the loss of this station would be a disaster for new music, independent labels and up and coming bands.

A friend of mine has drafted the letter below to the BBC…..Please read it and think how you should also respond. The decision can stil be reversed according to the Guardian Newspaper

To whom it may concern,
I’m sure by now you have received a whole raft of these types of email from far and wide. Well here’s what I have to say. I’m not an avid listener of 6 Music by any means. That, however is for one reason alone, it is only available on digital. The only means by which I can listen to these station is via my television and the likelihood of me wanting to cart that round on bus journeys is quite low. I can’t justify investing in a digital set either for one station. My listening is therefore more modest than I would like.

The issue of 6 Music’s small listener base isn’t popularity, isn’t the programming, isn’t the content, it’s the medium by which it is delivered and the exposure it is given. When 6 Music first started, I was so excited, finally those of us that really cared about contemporary popular music had a refuge from the over-hyped and over-marketed dross and drivel that was being pumped out of Radio 1. The vacuous presenters, the passion-free manufactured trash that most of the population listen to. THis has it’s place; Radio 1 needs to exist to appease the masses. However, there is a gap. That gap was filled admirably by 6 Music. If 6 Music had been a channel on FM, the 69,000 maximum listener staistic could have been ten times that. The problem with 6 Music, isn’t the popularity, it’s the availability. The simple fact is that, digital radio hasn’t been adopted at the rate everyone wanted. Leaving a gem like 6 Music on that platform was it death sentence, the nail in the coffin, the fact that little effort went into promoting it.

Save 6 Music. Don’t let it die, cut some of the drivel and use it to breath some fresh life into an amazing resource. An amazing resource not only for us, those of us who really care about music, but those artists that have benefited from it too. Put it on FM too, expose the population to it by that tried, trusted and very much alive format. Please help us BBC Trust.

I recommend you download some of these tracks as a minimum.

See, you don’t have to give your money to record company execs in suits to spend on cocaine and hookers.