Now first of all, I know its not deliberate…

WAIT ! This is going to sound like a rant, but I want to think of it as more of an explanation. Please, put yourself in my position for a few minutes it takes to read this.

Why taking photos without credit is hurting me.

Now first of all, I know its not deliberate It’s often born of ignorance or an afterthought.

“Hey, here is a great picture of me or the event, I know the guy who has taken it, he lets us post them free for personal use”

Except it doesn’t just stop there.

So take what has happened this week as an example.

Now I’m not going after anyone here personally. but this all started with a post from Birmingham Lions about 2 successful students getting places at US colleges.

The original post used a photo I took at the 2016 BUCS final between the Birmingham and Stirling universities of WR Michael Akinlade. 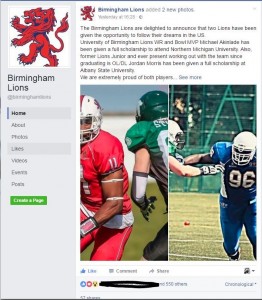 So the first picture is a cropped version of my original, no watermark and no credit.

This post is then shared and read by hundreds of people. Nobody knows that that photograph is one of mine. My brand. Whizzyfingers Photography has received no exposure.
It has been used commercially without permission.

OK, I have a good relationship with the Birmingham University and the players so I ask for a credit by way of a comment which has a dual purpose of also wishing the guys every success.

Well, the fact is they didn’t know it was mine. Lets look at where Birmingham Lions got the photo. 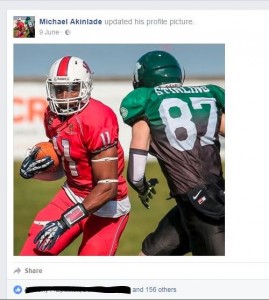 So Michael has used it as his profile picture since 9th June. He has cropped it, and not given any credit to me or the Whizzyfingers Photography brand.
I’ll accept he probably didn’t do this intentionally, he maybe didn’t read the rules and saw a great photo of himself in action and thought, it would make a great profile photo for Facebook.

Generally by doing so he didn’t really hurt the Whizzyfingers Photography brand? Well Yes, he did… 156 people ‘Liked’ that photo. None of them associate it with me who took it.

So thats how they got the photo. Birmingham lift the photo from his profile, not realising it’s one of mine… it gets shared some more as part of the Lions Post. 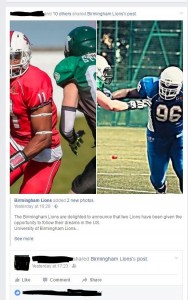 In fact at least 9 people on my timeline shared it. I’ve no idea how many people the original post reached. But none of them knew or were made aware that it was a Whizzyfingers Photography Pic.

It then gets picked up by another organisation. The London Blitz American Football Team.

They post their own version with the same uplifted photo. 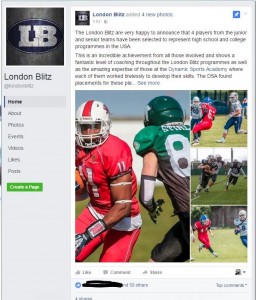 Again, no credit and 50 people have liked it in the first hour or so.

This then gets shared… 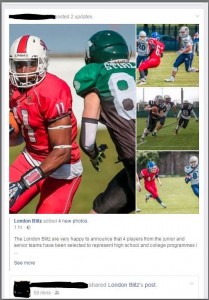 Can you see the pattern?

Now I’m not having a go at Michael, he is not the only one who does this and he probably never considered it a big issue to overlook giving me credit. Up to now I mostly have been foolishly turning a blind eye when people do this. But now this photo has gone all over and been seen by not just his friends and colleagues but people who follow UK Britball and probably even further.
Not one has been made aware that this photo belongs to me. I own the copyright to it and have now lost control of its distribution. Everyone who sees it will not necessarily associate it with Whizzyfingers Photography.

Why is this important? Well the only reason I can continue to provide photos in this way for free is that I get other paid work from people who see the kind of work I do. By being denied access to this because nobody can associate the photo with who created it. I’ve lost that exposure. It has been taken from me. I can’t get it back.

So do I start charging for all my work? Giving nothing away? Great big watermarks across the middle of all photos?… or just stop taking photos of American football and move onto something else?
Well, I don’t want to do any of those. I love covering this game, I love it when people do use the photos and like them. So please help me out here. Try and follow the rules so you get great photos to show your children and I get the correct accreditation and exposure I need. How would you feel if somebody just took what you created without even thanking you?

Thank you for reading…. And Michael, Great’Baller’, Good luck in the US.

UPDATE: Why didn’t I complain or ask them to take the photos down or issue DMCA notices ? Well I don’t want to. I want to give the UK game, the players and teams the exposure and help promote it. But it’s a two way street. I’ll help you, you help me. We all win. … And it needn’t cost you anything .