The Digital Economy Bill was rushed through the House of Commons last night thanks mainly to party whips and backdoor dealing between the the Labour Government and Tories. The Lib Dems kinda showed up but forgot to bring any balls.

Thousands wrote to their MP’s asking that this be debated properly and not rushed through in the ‘Wash-Up’.
Thousands were ignored by the very people meant to represent them.

Of course probably 90% of the voters out there don’t even follow what’s going on in enough detail to understand just how much of our genuine freedom and democracy was lost last night.
The censorship will soon start. The Goverment will decide what you can and can’t look at on the Internet firmly backed by those business lobbyists who have power and influence over policy.

If I write something on here and the Government or business don’t like it, they can shut me down.
They can now silence their critics and anything they don’t agree with.

Some people have put it better than me, please read this

I will no longer vote for any of these incumbent political parties who joined forces to well and truly introduce Totalitarian Government to Britain.

Lobbying by business takes precedence over YOUR views.

The sooner I can get off this sinking ship that is the UK the better.

This is an eye opener in to how Parliament works for MP’s and lobbyists and not for you. Democracy doesn’t work

…and if you want to know how they voted, or those that didn’t even turn up..Here

Dilemma
Whenever I get an invite to a fancy dress party I’m always faced with the dilemma, should I hire a costume or make my own?
Now, anybody who has traversed the aisles of a fancy dress hire or costume shop will know, hiring costumes is not cheap. This leaves the option of cobbling together something ‘Home Brew’ style and complimenting it with purchased accessories. Or buying a readymade ‘Cheapo’ outfit most likely to be made predominately of PVC, Nylon, gold coloured plastic and dyed turkey feathers.

Digressing
Out of interest, why is it that fancy dress shops seem to be pretty well overstocked with costumes for ladies that take the traditional ideas, (Nurse, Witch, Superhero, Fairytale , Policewoman etc) and give them an “Ann Summers” twist.
I can’t believe that the first idea a woman has when looking for a fancy dress costume is “What type of slut should I go as ?”

Nazi’s
But I am digressing of course, The title caught your eye and nearly three paragraphs in I still haven’t mentioned Nazi’s, so please be patient.
Now I’m recently faced with finding a costume theme for a 1940’s, war period party…Several ideas cross my mind, American G.I., British Soldier, perhaps a Spiv etc….Then a chance remark about ‘Dad’s Army’ got my mind cogs working flat out. I briefly considered the British Home Guard but was somehow attached to the idea of the ‘U-Boat Captain’ from one episode. Before you know it I had gravitated to that other staple Croft and Lloyd vehicle, ‘Allo Allo’
As there were several of us going as a group, having a common theme seemed like a good idea, and this ‘Allo Allo’ theme would accommodate both the men and women much better than Dad’s Army would.

Now at some point when trying to source suitable costumes for a theme like ‘Allo Allo’ you are going to be faced with the whole WW2 German Officer thing. Have you tried to actually get a WWII German Officer uniform ?

Taboo
Firstly, fancy dress shops seem to want to steer clear of the whole German/Nazi thing. I probably shouldn’t have been surprised at this as there was quite a furore when Prince Harry attended a fancy dress party dressed as a German Officer. 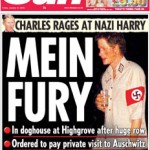 A predictable Media hyped backlash appealing to peoples moral outrage and the association of the German officers uniform as a Nazi emblem resulted in the whole genre of WWII German Uniforms being considered a taboo subject.
Whilst trying to find suitable items of German uniform on the Internet I came across an article that had appeared in the Manchester Evening News shortly after the Prince Harry escapade.
This was an inspired piece of media outrage which roped in the British Costume Association in calling on fancy-dress shops not to supply Nazi uniforms, except for theatre productions.

One even had a agreement with a makeup supplier that it was a condition of the contract they would not supply such ‘evil’ things. Talk about taking the moral high ground!
So that pretty much explained why it was difficult to source such attire, both at the High St fancy dress outlets and the popular online ones* 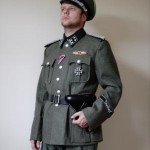 Now German WW2 uniforms were quite smart, but it is automatically and almost universally assumed amongst the Middle England, tabloid newspaper reading classes that everyone ever wearing one was firm supporter of the German Fascist party, a Hitler worshipper and therefore a held the Nazi viewpoint close to their hearts.
Would you assume that everyone currently serving in the British Army is a supporter of the Labour Party ?…Thought so.

Assumptions
Let me give you a single example of how wrong this whole German Officer=Nazi assumption is.
During WWII, Erwin Rommel was a serving German Field Marshall, famed for his Skill and compassion. Known as the’ Desert Rat’, he was a brilliant tactician and led the German Army’s Afrika Korps against General Montgomery in North Africa. 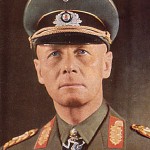 He wore a German Uniform, complete with his Iron Cross and German military markings, but he was a first and foremost a soldier….not a Nazi supporter or sympathiser by any means. He famously disobeyed many of Hitler’s orders regarding execution of POW’s and later in France refused to deport captured Jews.
He tolerated Hitler like you or me would tolerate a manager at work who we didn’t particularly like. Sometimes you just get on with it.
He was much admired by Allied commanders and was even complimented by Churchill himself.
Wikipedia:Erwin Rommel

War Crimes
There is almost an universal assumption amongst the general media educated populace that the WWII German Army uniform is too closely associated with war crimes and atrocities. Somehow, British and American uniforms tend to be revered as pure and absolute. After all, the Allies were above reproach weren’t they?
Perhaps a bit of history is in order…

The infamous Dachau massacre committed by US 7th Army in 1945

The Biscari Massacre(s) of 1943 where over 75 Italian POW’s were shot by members of the US 180th Regimental Combat Team.

The joint British & US bombing of Dresden in Feb 1945 . Dresden had little strategic or Military value, yet the intense bombing and firestorm which accounted for around 25,000 civilian deaths is considered by some to have been un-necessary and brutal

I could go on
Chenogne Massacre
No angels in War are there?…on either side.

Acceptable History
So why is the wearing of a British or American WWII uniform not hyped up as unacceptable by the media ? Well, there is a popular saying, “The Victors Write History”
WWII is part of 20th Century history and pretending the Germans were the only evil ones or sticking your fingers in your ears and going “La La La” if and when we get around to talking about war crimes, isn’t going to make it any different.
So once again, I ask. Why is it that obtaining, hiring and wearing an Allied uniform is acceptable, but German uniforms are not? Let’s look at parallels shall we? 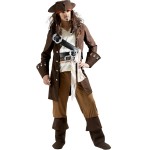 ..should this be deemed acceptable when you consider the lifestyle and brutality of both ancient and modern day pirates?…Of course it is because it’s all been romanticised by Walt Disney and Johnny Depp.

I am pretty sure those people who do dress up as Jack Sparrow or Blackbeard have nothing in common with real modern or historical pirates or share any of the same views. Holding up a yacht off the coast of Somalia and kidnapping the occupants is quite low down on their ‘To Do list’
Do we see the Sun newspaper scolding them and hyping up the extreme bad taste that dressing as a Pirate for fun represents? However we automatically assume that donning a German WWII uniform makes the wearer a Nazi, a Fascist sympathiser and anti-Semitic mass murderer!. Do you think Prince Harry really held those views when he hired that uniform?

Alternatives
In the wonderful self righteous media world, tags like ‘war criminal’, ‘paedophile’ and ‘terrorist’, have developed into an casually used label, easily thrown around to hype up sections of our population into a state of moral outrage.

Perhaps the next time you are invited to a fancy dress party you should don a simple ‘dog collar’ and go as that most family friendly and un-officious of persons…a Priest….Then everyone can just safely assume you are a paedophile.

* Luckily, I did find suppliers of what I wanted, at the market aimed at film & TV and re-enactment groups
The History Bunker
Epic Militaria
So now I have got things organised, but I still have a bee in my bonnet about the whole thing, hence this rant.

This made me so mad I had to get it off my chest.

BBC Breakfast News this morning had a guest on from some unknown association (it was that high profile I’d never heard of it!) claiming that parents who spoil children should have their child benefit taken away.
Her main claim was that having access to their own TV’s and computres was causing children to be anti-social and lack vital skills. She was adamant that this was the cause of anti social behaviour and that kids were starting school without vital skills.
Oh FUP off !
Virtually everyone under 25 has been bought up with computers and the current teenager has never known a world without social networks. The result, a whole generation comfortable with Computers and IT and the skillful ability to multitask and interact in ways she probably can’t imagine.
She was about 50 so I am guessing this was just a bit of jealousy. She should FUP off and write to the Daily Fail.

Seen those adverts on TV telling us all that cars are the biggest contributor to CO2..?
Yeah, so the Government is telling us to drive 5 miles less a week…use Public Transport Etc.
So, I’ve got to get to London on 10th Feb…Car?..Well, there is traffic, parking….Oh and the Government says I should drive less..
Let’s see, Train..?

Please don’t forget I’m not on MP’s expenses or a Banker with a huge bonus!

So I’ll drive halfway there then, that’s about 120 miles I would have done less that week
if we had a decent affordable public transport system.

Tell that to the polar bears.

People queing behind me at the shop checkout/sales desk….You are not going to lose you place in line if you actually leave two or three inches between my back and your shopping bags/trolley/basket !
I hate it…There I am waiting my turn patiently and the person behind you is pratically pushing you over ! I really don’t want my legs and back bashed just because you are an impatient pushy git !
Leave me a bit of room please, nobody is going to jump into a 3 inch gap..you won’t get to the checkout any quicker by assaulting me and if this carries on I will make sure I do slow you down by paying for my shopping with pennies.